Mellow out. Form a mudra with your fingers. Empty the mind. Drop your brain. Be in the present. Concentrate on your breathing.

That was the theme to the first two weeks of the new year for me, but unfortunately I couldn't tap into that. Thoughts stayed trapped in my head, and I couldn't perform even breathing. No, there was no Zen for me.

For a week I took three free yoga classes at one of the local studios to help with the sun salutations, lotus poses, and meditation goals I have. But the focus wasn't there. I couldn't get into poses without quietly venting or being confused. I was surrounded by people whose cars cost as much as my yearly salary and could put their foot behind their head.

I purchased gumballs to help me keep up with the sun salutations as I made my rounds. So far, I've been able to do only five of them. I hated myself for that.

But through these roadblocks claim clarity. My bucket list was invading my yoga practice. Even before this, I didn't -- and still don't -- believe in the healing power of yoga. Yet, I was giving it too much control over me. Make me flexible. Make me thinner. Make me learn to live simply and humbly. Give me inner peace. Yet, of those who know me, they say that yoga has a good effect on me.

For now, I'm taking it one step at a time. I plan to start a three-week meditation series to achieve the one-hour week goal, not thinking about downward-facing dog or hip openers.
Posted by Tamara at 1:14 PM No comments:

Email ThisBlogThis!Share to TwitterShare to FacebookShare to Pinterest
Tags: 16. Read and complete 10 books., 17. Do 108 Sun Salutations at the start of a season or the new year., 27. Execute lotus poses., 29. Meditate for one hour for one week., yoga

I learned everything I know from the movies

It's no secret that I love film. It developed at an early age, probably when I was 2, that my addiction began. It started like any other addiction. I went through the normal cimematic phases of life:
With this in mind, I thought that when choosing the 100 movies I would see for this challenge, the choices should go along the lines of refined cinematic taste. I have to keep my reputation of being a connoisseur of all things film. I had this in mind when I went to see "Kidnapped" as part of the Film Society's Spanish Cinema Now program in December.

This is not included in the challenge because I came into the movie about 20 minutes late. I had a free ticket, so I wasn't too mad about missing so much of it. Nevertheless, I am only including films I've seen from beginning to end. Despite the great reviews and the cinema verite qualities to this family-taken-hostage caper, this was by far the worst movie I have ever seen. Needless violence and melodramatic crying were over the top, and I can't believe anyone can find any value to this.

I usually hate Lifetime movies with a passion. They're so predictable and lack substance that I can solve the mystery or even know the dialogue within the first five minutes. It's like there's a Mad Libs puzzle used as a script. This link is probably the best to summarize my feelings toward Lifetime movies. However, this movie was a lot more entertaining than "Kidnapped." Unrealistic? Absolutely, but I couldn't stop watching this.

This got me thinking: Do we give more weight to movie in the way they're released? If "Unstable" were to be at the Toronto Film Festival first and not on Lifetime at 2 a.m., I'd probably buy a $20 ticket to see it. I have seen plenty of bad films premiere at top festivals (case in the point my photo from "The Tempest" premiere at the New York Film Festival), and I've spent a great deal of cash to say I saw it first and got to ask the director and its stars a bunch of questions. I've been to red-carpet premieres featuring big names:


But the fact is a bad film is a bad film no matter how you look at it. Do I anticipate having more Lifetime movies on my list? I actually hope not, but I don't want to spend too much money on cable-quality movies.

Posted by Tamara at 4:28 PM No comments:

How do you burlesque? Two weeks ago, I started my vacation with a day trip to New York City. I had signed up for a hula hoop workshop with Miss Saturn to learn how to use multiple hoops. Since one of my goals is to make my own hula hoop, I figured it would be a good idea to learn how to use several of them to encourage me to make more. Unfortunately, the workshop was postponed until the following month, but I had already purchased my bus ticket and had to make a mad rush to change plans. Another unforeseen event changed my plans as well. I had ordered two pairs of 5-inch heels online and had hoped to take a class to learn how to dance in them, but the shoes were not delivered in time. I got them three days later. That's for another post.
To my good fortune, there was a six-hour burlesque movement intensive workshop scheduled for the same time with the New York School of Burlesque. This way I could at least take a class with a pair of regular heels and learn something new in the meantime. I had just purchased Jo Weldon's The Burlesque Handbook and her fan dance DVD to improve my belly dancing, and I was looking forward to finally meet her.

I must admit that I was pretty nervous to take the class. There were so many things running through my mind, mostly of self-doubt like, "Am I even cool enough to take a class like this?" "Can I survive a six-hour dance class?" "And I'm to do this with what?" After doing a quick YouTube search, I found this video of one of the workshops:

That didn't help me at all. All the negative thoughts flooded my head, but I chose to ignore them and just go for it. And I was glad I did. There are so many burlesque moves that are similar to belly dance, and some of the new walks I learned would work for my choreography. The girls in the class were really nice and fun, and Jo had so much personality and advice. No more dance costumes in black for me after this class. And although I danced in a pair of 1.5-inch heels, I felt a bit more glamorous that day.

By the time I started a yoga class about two hours after the workshop, my body felt the effects of the six-hour class. I was completely exhausted, but I kept twirling and strutting throughout the rest of the day. Lastly, I had to great opportunity to meet Celine, a fellow lister who was able to achieve a goal on her list through the workshop. She took the photo of Jo and me. Thanks a million, Celine!

Email ThisBlogThis!Share to TwitterShare to FacebookShare to Pinterest
Tags: 9. Buy walk and dance in a pair of 5-inch heels., burlesque, dance

Posted by Tamara at 1:18 PM No comments:

Email ThisBlogThis!Share to TwitterShare to FacebookShare to Pinterest
Tags: 26. Buy a round of drinks, week in review 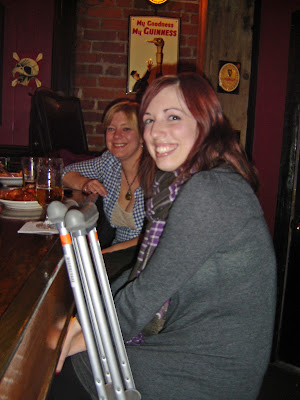 I think that if the full crew was there that night, I would have spent $100 on the alcohol alone. I was slightly disappointed, but the charge card was not.
Posted by Tamara at 10:58 PM No comments:

Email ThisBlogThis!Share to TwitterShare to FacebookShare to Pinterest
Tags: 26. Buy a round of drinks, friends, out on the town
Older Posts Home
Subscribe to: Posts (Atom)